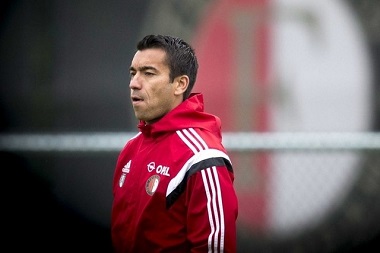 Former Netherlands international Giovanni van Bronckhorst described his promotion to manager of his old club Feyenoord as “a dream” as he prepared for a tough debut in the postseason playoffs.

The former Arsenal and Barcelona player, who won 106 caps and played in the 2010 World Cup final, was fast-tracked into the post on Sunday after Feyenoord failed to finish third in the Dutch league.

They were forced into the playoffs for a place in next season’s Europa League, for which the clubs finishing fourth to seventh in the regular season standings compete.

Fred Rutten was always going to stand down as coach at the end of the season and hand over to his assistant Van Bronckhorst but letting slip a strong position to end fourth saw him removed early.

“The question was asked whether I could take over straight away and I said yes. Naturally, it is a dream,” van Bronckhorst said.

“I am a child of the club. I started here in the youth section and I always wanted to be the coach one day,” he added ahead of the first leg of the playoff semi-final at Heerenveen on Thursday.

Feyenoord had been third for most of the campaign and would have qualified automatically for the Europa League had they stayed there. Instead, they face a possible four more matches in their bid for a place in European competition next season.

“It was a surprise to become head coach sooner than planned but I felt inside me that I wanted it. Naturally, I would have preferred if we had finished the season well and then I could begin calmly in the summer. But it is now not the case,” said van Bronckhorst.

“I’m anxious to see if I can turn into practice the vision, the playing style and ambition I have. With good football we can put Feyenoord back on the map,” he added.

Van Bronckhorst worked under Ronald Koeman before being assistant to Rutten who was appointed in March 2014 when Koeman left to join English Premier League club Southampton.

“I am also responsible for the poor performances of the last weeks. It is difficult to pinpoint what happened. If you look back at the good performances we had this past season, it is obvious we have a very capable team.”