Jeremy Mathieu proves to be the hero.. 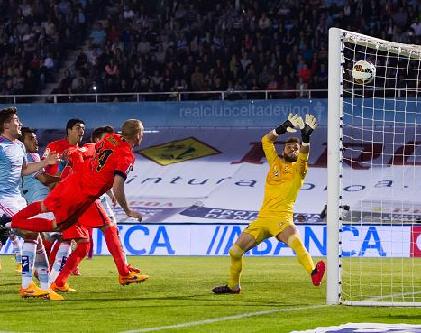 Jeremy Mathieu proves to be the hero as his header moves Barcelona four points clear at the top of La Liga with a hard-fought win.

Real Madrid had moved to within a point of the Blaugrana earlier in the day after thrashing Granada 9-1 at home but Barca were able to respond as they got the better of a hard-working Celta Vigo side eventually. Having been beaten by Celta at the Nou Camp earlier in the campaign,

Luis Enrique was keen to gain revenge as he returned to the club he managed for a season before take charge of Barca. However, the visitors found the first half hard work and were on the backfoot for the majority of the opening stanza, Celta striker Joaquin Larrivey forcing Claudio Bravo into the first save of the match as he blocked his cross goal effort.

Lionel Messi then saw Barca's best effort of the half saved by Sergio Alvarez before Neymar blazed over the follow-up. Celta pressed Barcelona all over the park and should have gone in at half-time a goal to the good, Larrivey missing a golden opportunity as he fired over from close range following Fabian Orellana's cut back. The second half saw Barca raise the tempo of the game and they should have gone ahead in the 48th minute when Neymar found the back of the net with a superb volley, only for the goal to be ruled out due to an incorrect offside flag. Dani Alves then miss-hit a shot from the edge of the box when he should have done better as chances came and went for Enrique's men. Barca eventually made the breakthrough in the 74th minute, Mathieu getting his second in as many games as he crashed his diving header into the back of the net off the underside of the crossbar from close range. Mathieu's header appeared to break Celta's resistance and they never recovered, losing Orellana to a straight red card late on when he was caught throwing turf at Sergio Busquets. Messi had a chance to put the exclamation point on the win in stoppage time when he went one-on-one with Alvarez but sent his chipped effort over the bar.