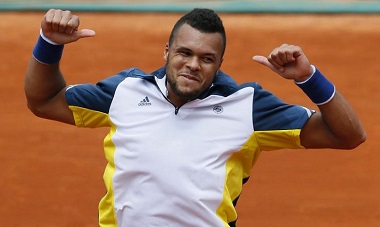 David Goffin is riding the crest of a wave at the moment, sitting at a career-best ranking of 20 but his form isn't that convincing. In 2015, his record is 11-10. On clay this season, it's 4-3 with wins over Gombos, Bolelli, Gulbis and Arnaboldi, and of those only Gulbis is inside the top 50 (somehow). He's lost 13 of his last 14 matches!
The Belgian is no slouch on clay, he won three successive tournaments on the surface last year, but those events were two challengers and a weak ATP level event when the rest of the tour was heading towards the hardcourt season in North America. His record at the bigger events isn't there yet. It may come in due course, but at the same time, he looks like the archetypal player who will pick off the weaker events to sustain his ranking rather than compete at the business end of Masters Series or Slams.
Jo-Wilfried Tsonga is the best of the big power players on clay (although that is a questionable title since he's the same height as Djokovic, he's just perceived as being a big guy). While he mightn't have a clay title on his CV, he reaches the second week at Roland Garros regularly and is a two-time quarter-finalist here. In the opening round, he took some time to overcome Sam Querrey, a first set tie-break with several breaks of serve, followed by a swift 6-0 set to put the match away. After four months off the tour with an arm injury, he now has ten matches under his belt and is hitting his straps.
The slate reads 3-1 to Tsonga, and the only time Goffin has been successful was in the lead-up to Tsonga taking his lengthy injury hiatus. That match has been the only time the Belgian has claimed a set and just a month ago, it was a relatively clinical straight set win for Tsonga.