First round matchup of Gronllers and Bautista-Agut at the ATP Rome. 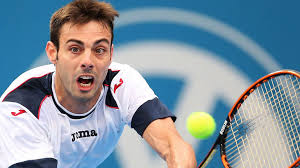 A Spanish derby in Rome as a former top 20 player takes on a current one, and the market is heavily in favour of recent form rather than past history.
Marcel Granollers hasn't had the greatest of years, 9-11 so far for 2015, including a run of six straight losses through Feb/March but has lifted his game of late. Wins over Tsonga in Barcelona and Monfils in Madrid helped him to R3 results in both events, and a bit of momentum as we approach the French Open. He was thrashed by Murray in Madrid but that didn't turn out to be such a bad formline in the end. His best result here was a QF appearance in 2013.
Roberto Bautista-Agut has been loving the clay season as well, R3 Monte Carlo, QF Barcelona, SF Munich and R3 again last week in Madrid, but without any real scalps to speak of - Cuevas and Kohlschreiber the best performed of his victims. So his form could be described as decent without really being tested.
The slate shows Granollers holding a 3-1 lead, but two of those were before Bautista-Agut had even turned 20 (he's 27 now) so just limiting it to within five years, it's split one apiece. On form, the edge definitely lies with the 14th seed, but the gap between them seems excessive. I think Granollers will be more than competitive here, the 4.5 games start appeals.