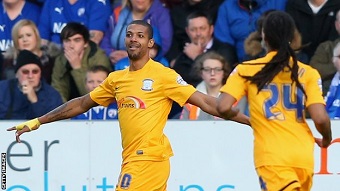 Preston won 2-0 in their previous meeting with Chesterfield at the Proact Stadium this season, with the other match ending 3-3.

Chesterfield have failed to score in four of their last five league meetings with Preston.

Joe Garner scored three goals in his two games against the Spireites this season.

The Spireites have lost each of their last four home games with Preston, failing to score in each one.

This will be Chesterfield's third play-off appearance, and first since 1995. They've reached the final on both of their previous appearances, losing to Cambridge in 1990 and beating Bury in 1995 (both fourth tier).

North End's defeat at Colchester on the final day was the first time they'd failed to score in a league match since November, finding the net in 29 consecutive games.

Chesterfield have not been in the second tier of English football since 1951.

Both teams have a win each in matches against each other this season, with both going to the home side.

Swindon have kept just one clean sheet in their last 16 league meetings with Sheffield United.

Jamie Murphy scored twice as the Blades won 2-0 at Bramall Lane against Swindon in January.

The Robins have not won at Bramall Lane since February 1970, drawing twice and losing 12 since then.

The Blades have made the League One play-offs in three of the last four seasons including this year, losing in the 2012 final on penalties to Huddersfield and in the semi-finals to Yeovil a year later.

This will be Swindon's eighth appearance in the play-offs, reaching the final four times and getting promoted on three occasions. They last made the League One play-offs in 2013, losing in the semi-finals to Brentford.

Sheffield United scored more than a third of their goals in the final 15 minutes in League One this season (23/66 - 35%).

The Robins failed to win any of their last five league games this season (D3 L2).