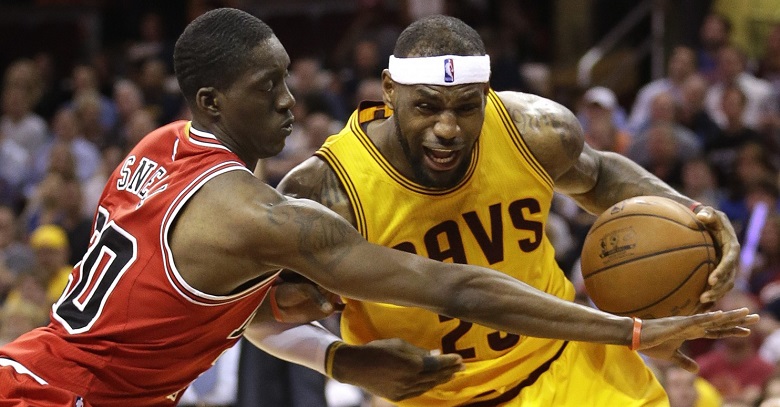 It was inevitable that Lebron James and the Cleveland Cavaliers were going to come out fighting in Game 2 on Wednesday night. The Cavs burst out of the traps and took a 13-2 lead as the Bulls struggling to shoot the ball. Cleveland never looked backed from this early lead, controlling the game and leading by 15-25 for almost the duration. Lebron James ran at the Bulls defence time and time again and despite the best efforts of Jimmy Butler, there was no stopping a fired-up Lebron. Iman Shumpert is showing signs of becoming the two-way threat I thought he would have become in New York. Shumpert scored 15, including four 3s but missed a large portion of the game due to a groin injury. Even with JR Smith returning from suspension on Friday night, the Cavs will be hoping that Shumpert – who returned for a spell in the 4th quarter – is fit for this crucial Game 3.

The story of Wednesday night’s Game 2 is that a lot went right for Cleveland and everything went wrong for Chicago and that makes Game 3 all the more difficult to call. Chicago shot the ball dismally; Rose went 6-20 and could not find his rhythm. His assist tally of 10 puts a gloss on a night of struggle for the point guard. Uncharacteristically, Pau Gasol had no influence on the game and was hardly looked at down the stretch. Jimmy Butler led the Bulls with 18 points though was largely preoccupied with trying to stop Lebron James. The Bulls main men have to be better on Friday night and surely will be in front of their home fans. Chicago needs a performance from Derrick Rose akin to that of Lebron on Wednesday. Rose needs to run at Cleveland and use his terrifying pace to unsettle them from the outset.

For Cleveland, their bench has been their main concern going into this series. With Tristan Thomspon now in the starting line-up and Shumpert slotting in for the suspended JR Smith, their bench looked painfully thin. However, James Jones – who has built a career out of shooting 3s – and Matthew Dellavedova came up big with Jones grabbing 17 points and 9 points and 9 assists for Dellavedova. Both players will see less playing time with the return of JR Smith providing Iman Shumpert passes fit. Either way it is hard to see them exert the same influence on Game 3. Tristan Thompson was excellent in his first playoff start, grabbing 12 rebounds (7 Offensive) and providing defensive steel on the inside with Timofey Mozgov. Taj Gibson was the only big man to really produce a threat for Chicago. Joakim Noah needs to offer more on that end for Chicago to succeed on Friday. Noah has just 4 points in the series.

Nikola Mirotic proved his match sharpness for Chicago and showed the kind of form that he produced in his breakout month of March in a seven minute cameo on Wednesday night. Mirotic reeled off 8 quick points, albeit mostly playing against the Cavaliers second unit that closed out the final minutes. Mirotic could provide a much needed spark in Game 3 and they need to give him decent minutes. Aaron Brooks is also struggling to shoot the ball and his minutes may have to be phased out in favour of Kirk Hinrich and Tony Snell. I’ve picked Chicago to win this series and wouldn’t have doubted them taking Game 3 at home. Wednesday’s performance was unsettling but should be an anomaly. Expect a better performance from the Bulls key men and improved changes to the rotation. Should be an incredibly tight game but I’m going with the Chicago Bulls to win game 3.

Chris Paul sat Game 2 on Wednesday night and watched his Clippers lose command of a game they lead for the most part. The Clippers took control in the 2nd quarter, outscoring the Rockets 41-21 with Griffin an unstoppable force. Griffin scored 26 in the 1st half, DeAndre Jordan shot a flawless 5-5 from the floor and all four of his free throws and the bench showed up. Lester Hudson provided a spark – his steal and subsequent assist for a Blake Griffin dagger a key moment as the Clippers got going. Hudson added 5 points of his own as the Clippers opened up Houston. A 65-56 halftime lead was chipped away by Houston in the 3rd quarter. Trevor Ariza guarded Blake Griffin to perfection and quietened the postseason’s best player. Houston took a lead early in the 4th quarter and never looked back, grabbing a vital win.

The big question going into Friday night’s game is whether Chris Paul will play or not. Paul has sat the first two games of the series and though Austin Rivers has been a stable deputy, the Clippers need their floor general back, leaving a newly confident Austin Rivers to add to a shallow bench. Paul will train on his own today as the team have no practice session but this will be his first on-court practice since the series began. Paul is listed as questionable to play tomorrow night but I feel that Paul will play a part in this one. Having seen Memphis’ Mike Conley play through tremendous pain to lead his Grizzlies to an unlikely away win in Golden State on Tuesday night, you have to feel Chris Paul, yearning for postseason success, will play through the pain barrier to lead his Clippers to a home win in Game 3.

The “Hack-a-Shaq” strategy was used by both coaches on Wednesday night. The Clippers began this as early as the 2nd quarter, intentionally fouling Dwight Howard and Josh Smith. The Rockets responded by hacking DeAndre Jordan. This sullied an otherwise thrilling contest but the tactic can work and it can lead to a tighter game as teams bank on missed free throws and scoring on their regained possession, which makes you wary on the spread betting. That said, the Clippers hardly used DeAndre Jordan in the 4th quarter due to danger of intentional fouling, going with a smaller line-up that struggled defensively. James Harden got in to foul trouble early for Houston but he came alive late in the 3rd and took over in the 4th, getting to the line and sinking free throw after free throw. Harden finished 15-15 from the line and with 32 points.

I feel the Clippers will win this one but I am banking a little on Chris Paul being back in order for them to beat the spread of -4.5 His presence alone would lift the team and the crowd in the Staples Center, a crowd who surely believe a Western Conference Finals is on the horizon after stealing homecourt advantage away from the Rockets. Rivers returning to the bench will mean they will have two scoring guards (along with Jamal Crawford) coming on to relieve Paul and JJ Redick – who had little influence in Game 2. If DeAndre Jordan spends big minutes on the bench, the replacements are slack in the forward line. Glen Davis was decent again on Wednesday, taking charges and using his body to effect but Spencer Hawes and Hedo Turkoglu have little to offer in these playoffs. Even without their All-Star point guard, the Clippers have largely looked the better team over the first two games of the series. I still think Paul will be back and I think he will help lead the Clippers to a strong victory in Game 3.