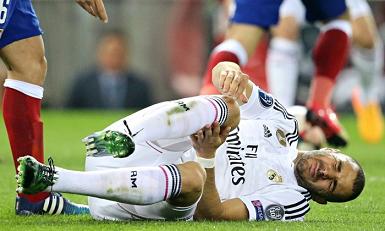 The Real Madrid forward Karim Benzema has not recovered sufficiently from a knee injury and has been left out of the squad for Tuesday’s Champions League semi-final first leg at Juventus, his club have confirmed.

The France international sustained the injury in last month’s quarter-final first leg at Atlético Madrid and although he only returned to training on Sunday, his coach Carlo Ancelotti had hoped he would be fit.

Javier Hernández could start up front in Turin alongside Cristiano Ronaldo and Gareth Bale, who returned from a calf problem as a second-half substitute in Saturday’s 3-2 La Liga win at Sevilla.

Another option would be for Ancelotti to switch to a 4-4-2 formation, with Hernández dropping to the bench and Isco coming into the midfield alongside Toni Kroos, James Rodriguez and Sergio Ramos.

Real are seeking a record-extending 11th European crown, while the Italian champions Juve are chasing their third.