2nd May MANAGER CHANGE FOR Granada 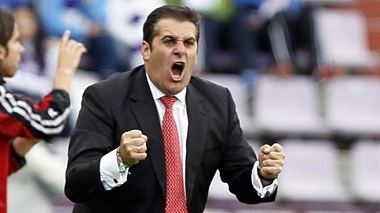 Granada have sacked coach Abel Resino after less than four months in charge following Thursday's 2-1 La Liga defeat at home by Espanyol which left the Andalusian club on the brink of relegation with four games left.

'Granada CF announces that coach Abel Resino has this morning been relieved of his duties,' 19th-placed Granada, who are six points from safety, said on their website (www.granadacf.es) on Friday.

Resino's replacement will be named later on Friday and Spanish media reported that they were poised to hand former Rayo Vallecano and Sporting Gijon coach Jose Ramon Sandoval the task of preserving their top-flight status.

Resino, who has also coached Atletico Madrid, evante and Celta Vigo, took over from the sacked Joaquin Caparros in January having helped save Granada from the drop in 2011-12.

The new coach's first game in charge will be on Sunday at Getafe.