25 Years Later, McEnroe Reflects on an Ejection (He Can Be Serious) 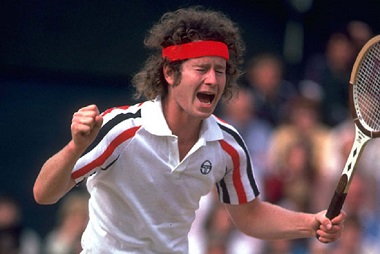 MELBOURNE, Australia — It was 25 years to the day since John McEnroe was defaulted from the Australian Open, and McEnroe was sitting in a makeshift ESPN office at Melbourne Park and trying to recall the look on his face when he heard the verdict on court that steamy Sunday afternoon in 1990.

“I haven’t seen it recently, but I’m sure it’s pure and utter shock,” he said.

It was, by McEnroe’s standards, a remarkably restrained reaction: deeply pursed lips; one slow shake of his head, which was wrapped in a bandanna; and an extended gaze with hands on hips in the direction of the chair umpire, Gerry Armstrong, after Armstrong dispassionately announced, “Game, set, match, Pernfors.”

But then perhaps silence spoke louder than rage, when it came to McEnroe during his playing days.

One of the greatest and most iconoclastic talents in tennis history, he won seven Grand Slam singles titles and 10 more in doubles, which mattered more in his era than it does today. But even now, at age 55 with a new generation following his tennis television commentary, McEnroe remains best known for the moments when he pushed the limits with chair umpires and officialdom.

That fourth-round Australian Open match on Jan. 21, 1990, against Mikael Pernfors of Sweden was, in a sense, the day he hit bottom, and it may come as a surprise to know that it was also the only time in his career that he was defaulted from a tour-level match. Words often come in torrents from McEnroe, but he spoke in drips on this topic: pausing often as he thought it through.

“It was rather ignominious I would say; it was almost so shocking that it was,” he said, stopping again to rephrase. “I pushed it to the limit a lot, so I suppose that even though I don’t feel like I should have been defaulted, say, in that particular match, I’m sure there were a few others where I probably deserved to be.”

The incident only looks stranger viewed from the age of Hawk-Eye and electronic line-calling, when players and officials now rely on technology to resolve most of their differences

“I’m like a dinosaur,” McEnroe said. “Who the hell is going to get defaulted now because he lost his cool?”

He also believes today’s technology would have helped him and rejects the theory that the benefits of his conflict-driven approach in terms of self-motivation or distraction to opponents were outweighed by the negative in terms of the energy wasted and the resentment generated. “I think there’s no question I would have been a better player with it,” he said.

Loopholes and the potential for conflict still exist: See Serena Williams’s threatening a lineswoman at the 2009 United States Open after being called for a foot fault, one facet of the rules that is still not covered by electronic surveillance. And temperamental players still exist: the Australian Nick Kyrgios was fined for racket abuse and an audible obscenity during his first-round victory at this Australian Open.

But there is no man or woman who challenges authority on a match-in, match-out basis as McEnroe did.

By 1990, he was already on his way down: five years removed from his last Grand Slam singles final at the 1985 United States Open. Yet there had been recent cause for optimism: a victory at the WCT Finals and a semifinal run at Wimbledon in 1989. He even arrived in Australia early, taking part in the Hopman Cup, the team event in Perth, which began the day after Christmas in 1989 and ended on Jan. 1. Because the Hopman Cup began in 1989, the old rules on disqualification still applied instead of the new rules that had been approved for the 1990 season.

Difficult as it is to believe, McEnroe said he had been unaware of the imminent change, and in Perth he flirted with disqualification, in a quarterfinal match against Paolo Canè of Italy.

“The whole incident in Melbourne really began at the Hopman Cup,” said Peter Bellinger, the tournament referee at the Australian Open from 1983 to 2005. “Some of the officiating at the Hopman Cup wasn’t as good as it could have been, and at one point John refused to play on and was taken through the three steps of the code, which was a game penalty.”

In Melbourne, McEnroe cruised through his opening three rounds without losing a set. Richard Ings, a chair umpire at the time, worked one of his early rounds and said he considered reminding McEnroe of the code change, but ultimately did not.

“The rule changes were always posted in the locker room,” Bellinger said. “But he obviously didn’t read them.”

Then on the first Sunday — Jan. 21, 1990 — McEnroe took to the court against Pernfors, a speedy Swede and former member of the top 10.

Armstrong was in the chair and he gave McEnroe his initial warning early in the third set when McEnroe glared at a lineswoman after a questionable call and bounced the ball upward on his racket strings in front of her.

Armstrong later gave McEnroe a point penalty for racket abuse after he threw and cracked his racket in the sixth game of the fourth set, when he was up two sets to one.

“He had an edge in that set, but I still felt like I was going to win the match and even that set,” McEnroe said. “I missed a shot I should have made, and I sort of threw the racket on the ground and caught it. I wasn’t trying to break it, but I didn’t throw it at like a linesman or a ball boy. And then I caught it. Players do it all the time, but you heard a crack and I guess technically in those days the umpire could be discretionary on the warning. And then all of the sudden it was a point penalty, and my recollection is that was when I went up and said, ‘Hey it’s 120 degrees out here. Maybe you could cut me some slack.'”

McEnroe argued his case and called for the Grand Slam chief of supervisors, Ken Farrar, who soon arrived on court with Bellinger.

After failing to change any minds, McEnroe turned away from the chair in the direction of the baseline, muttering an expletive in a comment that has no place in a family newspaper.

“I don’t know how well people even heard it, because it was sort of under my breath anyway, but he heard it,” McEnroe said of Farrar. “And maybe the umpire heard it, and then that was all she wrote.”

McEnroe braced himself for the game penalty, but instead it was a match penalty. Today, McEnroe views his default as the price he had to pay after years of favorable treatment.

“You get that in part because you’ve gotten to a certain place in your own line of work,” he said. “But of course when you are on the way down, which I was slowly but surely heading, then there’s those same people that are waiting for you that are going to, all of the sudden, not be quite so kind.”

Bellinger, who said he has not discussed the incident with McEnroe since it happened despite spending time with him, does not see it that way. “It was just officials following the rule book,” he said. “He deserved what he got under the rules.”

Armstrong, still on duty as a chair umpire at this Australian Open, declined to comment through an intermediary, citing rules that restrict working umpires from speaking publicly. But he has spoken about the match in the past.

“The magnitude of it didn’t really sink in until the next day,” Armstrong said in an interview with The Sunday Times of Britain in 1997. “It just sort of happened. I followed the rule book, and it was just all in a day’s work.”

McEnroe was the first player since Willie Alvarez, known as Pato, in 1963 to be disqualified from a Grand Slam event for misconduct.

“I remember the first thing I thought when I got defaulted was that my manager Sergio Palmieri didn’t tell me they changed the rule,” McEnroe said. “So it was a little unfair that you’re always trying to blame anybody but yourself. I should have known the rule change.”

Many in the crowd at Flinders Park, which had not yet been renamed Melbourne Park, began booing the decision and chanting, “We want McEnroe.”

“I never told anybody what John said, and I’m still keeping it to myself,” Bellinger said. “But Ken Farrar heard it, and if the people in the stadium had heard it, they might not have booed quite so much. But they’d paid their money, and I think a lot of people who paid their money in those days did it to see McEnroe challenge authority as much as play tennis.”

That was and remains true. When McEnroe plays an exhibition, as he did against Pat Rafter last week in Sydney, or a seniors tour event, his tirades — real or manufactured — are a stock part of the spectacle.

What happened in Melbourne in 1990 did not change the sport, at least not right away. The three-step disqualification rule is still in place, but Bellinger believes it did increase the push for electronic line-calling, with a forerunner system, TEL, getting some support in the early 1990s before the Hawk-Eye system was adopted in 2006.

Ask McEnroe if what happened in Melbourne in 1990 changed him, and he shakes his head. “In a way, I wish it would have changed me more,” he said, adding that he would have liked to have been shaken up “to the point where I would have A, taken the game more seriously, and B, enjoyed being out there more. I don’t want to say I wished it taught me to stay within the confines of the rules or whatever. Ironically what people come up to me about the most now is people missing the personality and sort of the confrontation.”

McEnroe says that when he takes on players in matches now, he can hear the fans yelling his signature phrase, “You cannot be serious”; and can sense the frustration in the stands if he does not deliver an outburst.

“They’re disappointed,” he said. “And so that’s sort of a weird dynamic, to put it mildly — that I’m actually getting paid extra for things I used to get fined for.”