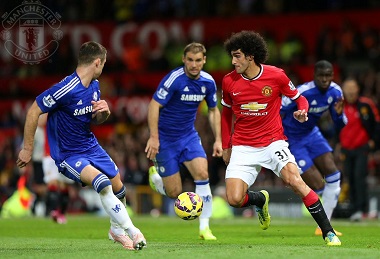 Chelsea are coming into this match in excellent form. Having beaten near neighbours QPR 1-0 last weekend, Chelsea currently top the table on 73 points and they are now 7 points clear of 2nd place Arsenal with only 7 games remaining.  Chelsea’s recent record at Stamford Bridge reads an impressive looking W12, D3, L0.

When playing the top 2 tier Premier League sides, Chelsea’s record reads a very impressive looking W8, D2, L0 and Chelsea can be backed at around 2.05.

The draw can be backed at around 3.45 and this offers some decent value and should certainly not be discounted.

Manchester United are coming into this game on the back of a very impressive 4-1 victory over Champions and neighbours Manchester City. Indeed United have now won their last 6 Premier League games on the bounce. Manchester United’s recent away form reads a resilient looking W5, D7, L3.

As far as goals are concerned then the stats suggest that the game may not be the goal bonanza that we are anticipating. When looking at both sides' last 15 home and away games then we see that in the 30 matches, 19 games have seen 2 goals or less and only 11 matches have seen 3 or more. However when facing similar opposition, 6 of Manchester United’s last 10 away and 5 of Chelsea’s last 10 home have seen 3 or more goals scored.  Under 2.0/2.5 goals can be backed at around 2.02.

This should be an excellent match and my ratings suggest that there is value both in the goal and match line. Looking at the goal line then my ratings suggest value in Unders and this is helped with the loss of Chelsea’s Diego Costa through injury. However it should be noted that 4 of the last 5 head-to-heads have seen 3 or more goals. Instead I am turning to the match line where despite Costa’s absence Chelsea look the team to be on. When facing teams occupying Top 6 places Chelsea have won 9 of their last 10 matches and my ratings suggest Chelsea offer decent value to win this game and take a step closer to winning the Premier League title.

So my recommended trade for this game is Chelsea -0.5 goals at around 2.05.