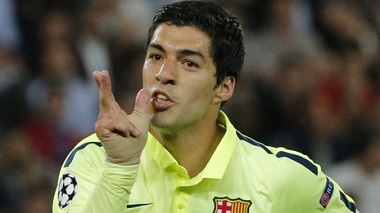 Barcelona’s claim on this competition can feel irresistible on nights such as this. They prospered here where Chelsea had so laboured, inflicting a first home defeat in European competition in nine years and 34 games on wounded PSG with Luis Suárez for once eclipsing Lionel Messi as the chief tormentor. The Uruguayan’s two goals were sumptuous, his team’s progress in this quarter-final first leg serene.

Those teams who count themselves in contention should beware. This was a ruthless way to dissect PSG’s raised expectations in the wake of last month’s elimination of the Premier League’s champions-elect. Patched up and makeshift PSG might have been, untimely injuries and suspensions taking their toll, but there was a gulf in class. Laurent Blanc’s players heaved unsuccessfully to contain slippery opponents and were made to look utterly limited at times.

Luis Enrique described Barcelona’s performance as “spectacular, both in defence and attack” though, for all their familiar slick possession, it was Suárez’s incisive interventions after the interval that took the breath away.

The former Liverpool forward had been starved of the ball up to then, though he is rarely peripheral for long. Midway through the second half, just as PSG sensed a route back into the tie with their deficit still slender, he drifted unchecked to the right flank to collect possession from Martín Montoya. There was a nutmeg of David Luiz – not the last – and a burst away from Marquinhos, the striker holding off Maxwell before converting Barcelona’s 400th goal in this revamped competition inside Salvatore Sirigu’s near-post. Home players puffed out their cheeks in despair.

David Luiz had been summoned from the bench in the immediate aftermath of Neymar’s opener, replacing Thiago Silva who had succumbed to a thigh injury. Yet the former Chelsea centre-half had been rushed back from his own hamstring problems and was rather dazzled by Barça’s vibrant approach. By the end his involvement felt cruel.

Suárez, playing the ideal No9 role, dropped deep 11 minutes from time to collect from Javier Mascherano and repeat his nutmeg on David Luiz, sprinting clear with the Brazilian marooned before conjuring a glorious finish high beyond Sirigu for Barca’s third. The striker described that second sublime touch through David Luiz’s legs as “a beautiful action”, while the shot was just as jaw-dropping.

It was his 11th goal in as many games and drew praise of sorts from his manager. “Suárez is special in his own way,” Luis Enrique said. “Look at the goals he scored for Ajax and Liverpool. He is very strong and finishes so well. But it wasn’t just about Suárez. We were superb in defence and midfield.”

Drawing PSG’s sting was one thing. They also cut their hosts to shreds at times, with the movement of Messi and Neymar serving to liberate the third of that mouth-watering triumvirate.

Barça had set the tone early, weathering the home side’s initial urgency which had Javier Pastore air-kicking when he might have scored, to impose their own rhythm. They were unperturbed by PSG’s attempts to clog up their own half with bodies, the visiting players’ close control and ability to wriggle into the tightest of spaces and emerge in possession still setting them apart. They targeted Gregory van der Wiel, whose eagerness to push up the flank left tantalising space at his back for Neymar, in particular, to exploit.

Messi curled one attempt on to the post from distance having hoodwinked his former club-mate, Maxwell, with a sway of the hips. When Adrien Rabiot lost possession to Sergio Busquets in central midfield with Marquinhos drawn too far upfield towards the play, the visitors shifted the ball to Messi via Andrés Iniesta for the Argentinian to dart into the space vacated by the young centre-half. His pass behind Van der Wiel was perfect for Neymar who converted with ease. The move had comprised eight touches and three passes to yield the opening goal. How PSG missed the snarl of the banned Marco Verratti in the centre, or indeed the charisma of Zlatan Ibrahimovic up front.

Edinson Cavani, deputising centrally for the suspended Swede, was too ponderous with Marc-André ter Stegen denying him his best attempt. Van der Wiel’s late consolation, deflected wickedly by Jérémy Mathieu’s leg, felt like false hope. “We can’t think about what might have been with those players available,” Blanc said. “We were dominated by Barcelona and never controlled the ball well enough. They were better than us in virtually every department.”

There is no shame in that but PSG, even depleted, will have expected to have offered more than this meek showing. They will travel to Spain wary of what awaits. In this form, Barcelona can seem untouchable.