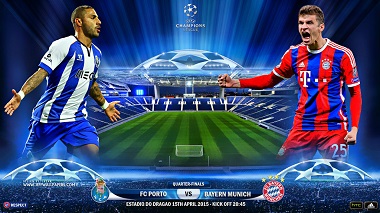 Porto are having a good domestic season and after coming off a 3-1 victory over Rio Ave. Porto now sit in 2nd place on 68 points which is just 3 points behind Champions Benfica.

Porto have a good European pedigree and their record reads W6, D2, L2

Since 2000 this is the first time that these 2 sides have met in the Estadio Do Dragao.

Bayern Munich are once again having a dominant season and they are well on the way to winning their 3rd title in a row. After beating Frankfurt at the weekend Bayern are now 10 points clear of 2nd place Wolfsburg. Bayern’s domestic away record reads W11, D3, L1.

When facing the Top 6 German sides away from home their record reads W6, D3, L1.

Bayern’s recent Champions League away record reads W6, D2, L2. It should be noted that Bayer have won just 2 of their last 4 European away ties.

This looks a very good matchup between 2 sides that have an excellent European pedigree. When looking at the goal line then my ratings suggest that the line is priced about right. Looking at the stats then I would lean towards Overs as Munich will be keen to grab the away goal. However it should be noted that Porto have kept 12 clean sheets in their last 14 home games.

Looking at the match line then my ratings suggest that there is some decent value looking at the home side on the +0.5/1.0 handicap. Since 2006 Porto have hosted 32 Champions League games and they have only lost 5 of these matches and none of these losses have come by 2 goals or more. On the flip side of this since 2012 Bayern have played 20 away ties and have won 12 of these matches and 8 by 2 goals or more. Also over recent season’s you do get the impression that Porto are vulnerable when playing the elite sides. However defensively Porto will be extremely well organised and there looks to be some decent risk v reward backing them on the +0.5/1.0 goal handicap.