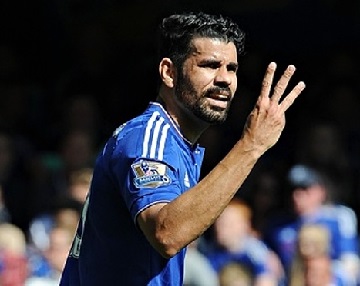 Striker Diego Costa will miss Chelsea's next three domestic matches after a Football Association charge of violent conduct was upheld.

Costa denied the charge, relating to an incident involving Laurent Koscielny during Saturday's 2-0 win over Arsenal.

Costa, 26, put his hands in Koscielny's face before clashing with Gabriel, who was sent off but had a three-game ban overturned earlier on Tuesday.

In a statement,  Chelsea said they were "disappointed" with the verdict.

Costa's ban covers Chelsea's League Cup match at Walsall on Wednesday along with Premier League matches against Newcastle and Southampton.

Having confirmed the match officials did not see the incident between Costa and Koscielny, the FA supplied video footage to a panel of three former elite referees.

Each had to independently rule Costa's actions to be an instant red card for the FA to proceed with the charge.

Arsenal defender Gabriel was sent off by referee Mike Dean for violent conduct after raising his leg and appearing to catch Spain international Costa.