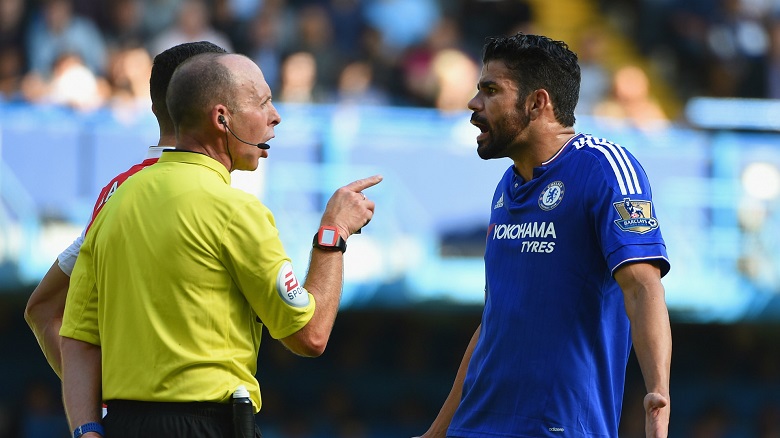 The Chelsea striker will now become a marked man with officials - particularly with off-the-ball incidents - but don't expect an FA charge for his behaviour against Arsenal.

The wait is nearly over for Chelsea and Arsenal as they find out the details of Mike Dean’s match report to the Football Association on Monday morning.

It was a tough day at the office for Dean. Clearly, Diego Costa is very lucky to have stayed on the pitch, despite not officially committing a foul during the entire game, while the red card for Gabriel was very harsh.

But if you separate this incident from the rest of the game, Dean didn’t actually perform that badly, and he kept his composure to wave away two soft Chelsea penalty calls, while Santi Cazorla deserved his two yellow cards.

I don’t think Arsenal would have had many complaints if Gabriel had been shown a second yellow card for the flick out at Costa, and as a small consolation, the Gunners have a good chance of winning an appeal to the FA.

Earlier this month, Stoke City’s Ibrahim Afellay had his ban reduced from three to two games after slapping West Brom’s Craig Gardner. Did the FA set a precedent with that? Gabriel’s kick on Costa doesn’t warrant a three-match suspension - it’s excessive - so Gabriel should be returning sooner for Arsenal.

As for Costa, we are all still in the dark as to why Dean actually cautioned him. Was it for the aggressive attitude towards Gabriel, or for bumping Laurent Koscielny?

Costa’s arm across the face of Koscielny appears to have been overlooked by the officials, although, if his yellow card was for that incident, it’s been deemed ‘reckless use of the arm’, rather than violent conduct, which would have been a straight red card.

What did let Dean’s performance down after the main incident was his inconsistency. Costa’s flick out at Alex Oxlade-Chamberlain in the second half warranted a second yellow card. Dean was looking straight at the incident, he had a clear view and that was his chance to send the Chelsea striker off.

But don’t expect the FA to take action against Costa as we’ve seen little retrospective punishment from the FA so far this season. Gabriel escaped a ban for elbowing Marko Arnautovic in Arsenal’s win over Stoke a few weeks ago, while nothing was done about Costa’s forearm smash on Everton’s Seamus Coleman.

Because of the mass involvement of players in the bust-up at Stamford Bridge, both teams should expect to be charged with failing to control their players.

What will happen now is Costa will be a marked man. Officials will be on the same level and will keep their eye on the Chelsea striker, especially with incidents off the ball.