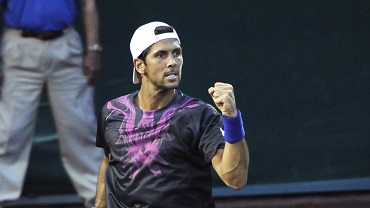 Fernando Verdasco takes on Sam Querrey for a place in the Houston Final.

Houston is one of the few clay court tournaments in the United States and is contested on the grey clay. This is a match between a home favourite and the defending champion. The two have met on four occasions and Querrey leads the head to head 3-1. Querrey has won the last 3 on the bounce and Verdasco’s last victory against the American was back in 2009. All past matches between the two have either been on the hard courts or the indoor surfaces and this is clay. Verdasco is the higher ranked of the two at number 30 in the world against Querrey’s 42. Both men are on the slide and perhaps past their best as Querrey was once a top 20 player getting as high as 17 and Verdasco up at number 7. This was a long time ago however. Querrey is a player struggling for form. In the run up to this event he has failed to put together back to back wins and hasn’t won a second round match since Memphis in February. He is 7 wins 7 losses across all surfaces in 2015. Verdasco’s form has been slowly improving over the last few weeks. He has played significantly more tennis and has the confidence boost of beating Rapha Nadal in Miami last week. He is 15/7 on all surfaces this year. Although the head to heads favour Querrey the surface is the important factor here and Verdasco is without doubt the better clay court player. Querrey plays very little clay court tennis each year and chooses the hard courts where his big serve is more effective. Being a Spaniard Verdasco loves the clay and his record throughout his career shows it.

• Verdasco is the higher ranked

• Verdasco has been returning to form over the past few months

Home support will not be enough for Querrey today. Fernando Verdasco is too good a clay court player to lose to a man in such weak form and with ranking points to defend he will be going all out to retain his title. This may be a close match if the American’s big serve finds the lines but today we go with Verdasco.