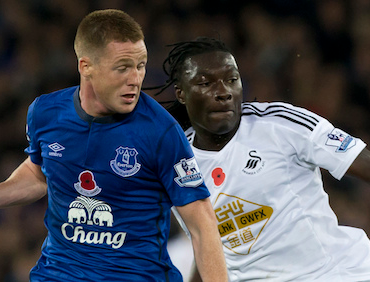 Under the guidance of manager Garry Monk, Swansea are having a very good season. They are coming off a comfortable 3-1 home victory over Hull City and currently they sit in 8th place on 46 points and are in line for their best Premier League finish. Swansea’s recent home record reads a solid-looking W7, D4, L4.

When hosting sides of Everton’s stature, Swansea’s record is mediocre and reads W2, D3, L5, and Swansea can be backed at around a value-looking 2.60.

The recent head-to-head record at the Liberty Stadium favours the away side and reads Swansea 0 Wins, 0 Draws, and Everton 3 Wins.

If you do fancy Swansea to do well here then you can keep the draw on your side and Swansea can be backed off scratch at around 1.84.

The draw can be backed at around 3.30, and this doesn’t look to offer the necessary value.

Everton are coming into this game in some reasonable form and they have now won 3 Premier League games on the bounce, beating Southampton 1-0 last time out. Before this run, Roberto Martinez' side were skirting with relegation, however the Toffees now sit in 11thplace on 37 points. Everton’s recent away record reads W4, D2, L9.

When facing teams of Swansea’s grade, Everton’s away record reads a reasonable-looking W4, D2, L2, and Everton can be backed at around 2.90. Looking at my ratings this offers no real value.

When looking at the goal line, then the stats suggests value in the unders. When looking at both side's last 10 home and away games against similar opposition, 12 of the 20 matches have seen 2 goals or less. 5 of Everton’s last 6 away games and 6 of Swansea’s last 10 home games have also seen 2 goals or less scored and Under 2.0/2.5 Goals can be backed at around 2.00.

This is a good looking match-up and my ratings suggest that there is value both in the match and goal line. Looking at the goal line, then Everton have certainly had problems scoring away from Goodison Park recently, and they have only scored in 3 of their last 9 away games. So here I am leaning towards unders where my ratings suggest some small value. Despite not beating Everton in any of their 7 Premier League meetings over the past 4 seasons, Swansea look good value to register a win today. Swansea do have a poor home record against the top sides, and all 4 home losses this season have come against teams occupying top 7 places. However, Everton are certainly not the side they have been over the past few seasons and here despite Everton’s recent winning run, Swansea look good value to avoid defeat.