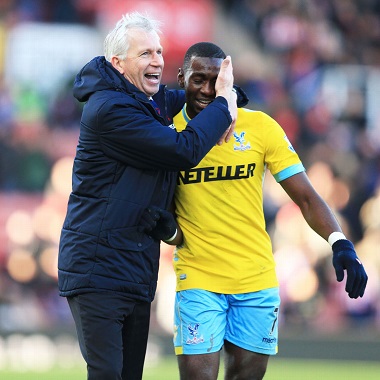 The Reds have been linked with a move for the lively Crystal Palace winger but, while the Eagles boss admits that "everyone has a price", he would demand a huge fee

Crystal Palace manager Alan Pardew says that it would take at least €56 million for him to even consider selling  Yannick Bolasie this summer.

The winger has been linked with a close-season switch to Liverpool after a fine campaign for the Eagles this term and, while his boss accepts that "everyone has a price", he insists he would demand a huge fee.

"If someone wants to give me €56m-€84m [for Bolasie], somewhere in there, that would be good," Pardew told reporters. "I'd take it and we'd build the team around that money.

"Everyone has a price, of course. I can think of a situation I had at Newcastle in the last hour of the transfer window - a team that wasn't great and not far away from the relegation zone and we accepted €42m for Andy Carroll.

"Now, at that time, I said to the chairman it was a gamble because we were by no means secure but we did it and we spent the money wisely and ended up with a very, very good team. It is about the right price for the right player and then you have to build on that.

"If a manager wants to ring me up, I'll talk to them and give them a proper price."

On the other side of transfer speculation, Pardew declared himself "surprised" to have been linked with a swoop for Newcastle goalkeeper Tim Krul.

"I'm surprised at that because there's been no contact between me and Newcastle and certainly not with me and the player or the agents that represent him," the ex-Toon manager said.

"I don't know where it's come from and, quite frankly, it's unwelcome. I have a great situation with the goalkeepers here. Tim's a great goalkeeper but he's a Newcastle goalie and I'm pretty confident that's where he'll stay.

"I don't understand that one. As far as we're concerned we're looking at a number of players for next season but a goalie isn't one of them."